With the Razorbacks competing in the 2018 College World Series, many locals and visitors will be looking for a great place to watch the baseball games. Outside of Omaha, restaurants and bars in Fayetteville are the best places to watch the Hogs compete.

The games will be played from June 16-27, and Arkansas’ first matchup is Sunday, June 17, with an old Southwestern Conference foe, the Texas Longhorns. The “Omahogs” and the ’Horns are scheduled to toss the first pitch at 1 p.m.. If you’re in need of a table or stool to watch, here are a few popular places in Fayetteville.

Located right off the famed Dickson Street, Grub’s is a great place to catch a game right in the heart of the entertainment capital of Fayetteville and Northwest Arkansas. Offering plenty of TVs and good eats that pair well with cold suds, Grub’s has been a game-time staple for nearly 20 years. We recommend trying the Pizza Dip served with Frito’s. (If you can’t make it down to Dickson, check out their Uptown location on the north side of town.)

Located on Dickson, Farrell’s is Fayetteville’s first gastropub. This upscale sports bar is perfect for those looking for a game-day environment with plenty of flatscreen monitors and a menu more geared toward foodies. Farrell’s serves delicious, freshly made dishes, priding itself on using the highest quality, organic and local ingredients whenever possible. We recommend the Hangover Burger, which includes applewood smoked slab bacon, a fried egg, crispy hashbrowns and American cheese.

It’s hard to beat the combo of watching a game and eating some tasty wings. Foghorn’s — which has locations right off College Ave., next to Baum Stadium and on Mission Blvd. — has award-winning wings with 50 sauces and 8 dry rubs to choose from, and you really can’t go wrong with any of them (although “Volcanic” and “Ghost Pepper Punch” are not for the faint of heart). If you have a hard time picking out an appetizer, try the Starter Sampler: fried pickles, breaded mushrooms, cheese curds and onion rings.

JBGB has quickly become a favorite place for locals and visitors to Fayetteville, and not just because of its outdoor gaming area that includes shuffle board, baggo, ping pong, bocce ball, sand volleyball and a wading pool. Along with its summer concert series, which brings in great musical acts — like Randy Rogers Band on June 21 — JBGB has a menu featuring a variety of munchies. Oh, and they make their own beer! It’s located on Steele and Van Asche in the Uptown District, and we recommend trying out their tacos or sliders — or both!

One of the most popular patios in Fayetteville. Sassy’s is Razorback crazy, and they even host a weekly show with Basketball Head Coach Mike Anderson. With locations on College Ave. and Wedington, Sassy’s is a barbecue place for everyone, so the menu has a little of everything. We recommend anything topped with Sassy Jones BBQ Sauce; the recipe was first developed in 1895 and has been passed down for generations.

More from This Author

Get your FREE Visitor’s Guide full of insider tips and guides to hotels, dining, entertainment, the arts, and more 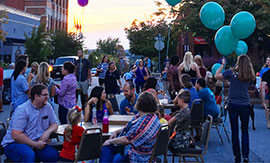 Get Your Search On!